A One-Day discourse sought to create a platform to encourage, strengthen and inspire women in Sokoto State to take up their innate abilities to promote peaceful coexistence in their families and communities titled: Women, Peace and Social Cohesion in Sokoto State. It took place at the TAMAJE CIVIC HALL Goshen Centre, opposite Pinnacle Hotel, Sokoto State on the 23rd January 2020. The even was sponsored by the Department for International Development (DFID) and the National Peace Committee and implemented by The Kukah Centre. 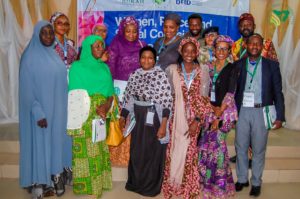 The One-Day discourse on Women, Peace and Social Cohesion brought over 300 women from both Christian and Muslim faith, women groups from different faith organizations, the Permanent Secretary Women and Children Affairs Sokoto State, gender officers from the different organization such as PLAN International, Religious leader, government representative and academics. Over eighteen percent of the participants were men from different works of life. The One-day discourse brought together women of different faith and works of life from private and government level to learn and discuss various forms of violence against women in Sokoto State. Significantly over eighty two percent of the participants stated great level of satisfaction on the topics of discussion and stated they were likely to use learning from the One-Day discourse in their work, family and communities, and noted that the value of the event for sharing experiences and discussing relevant issues women in Sokoto are faced with.

RAGING CONFLICT IN NIGERIA AND ITS IMPACT ON WOMEN 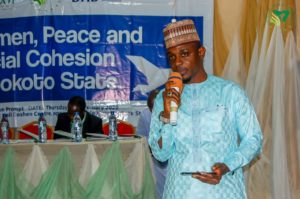 A presentation was made by Dr Mansur Isah Buhari from Usman Danfodiyo University Sokoto from the Modern European Language and Linguistics department. He took the first plenary session with the focus.” Raging Conflict in Nigeria and its impact on women”. This presentation aims for providing an overview, reason, pattern, cultural perceptions and trends of conflict in Nigeria in the context of Sokoto narrowing it down to women in Sokoto state. The speaker argued that when addressing the issues of women as peacebuilders and promoters of social cohesion, it is important to identify the various form of violence women face in Sokoto due to the uniqueness of the cultural, traditional and geographical narratives in Sokoto state. It is also therefore necessary to draw out the reasons for why women face certain violence in their homes and communities. The speaker highlighted the following:  harmful traditions, family roles and religious misconceptions as reasons for a certain form of violence against women in Sokoto State. Furthermore, the speaker explained that this form of violence results in physical, emotional, sexual and economic violence. 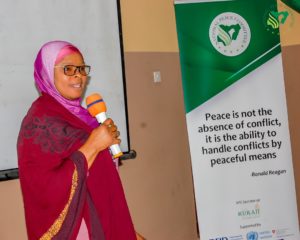 Hajiya Aisha Mohammad the Permanent Secretary of the Ministry of Women and Children Affairs in Sokoto State, during her brief remark stated that the nature of society is a major contributor to the nature of conflict, violence and deprivation of the rights of women and girls.  She further re-emphasized their economic reality and that the Ministry has taken a counter-economic violence strategy to empower women across various Local Government Area by providing a platform for women to acquire basic skills to build their capacities in Sokoto State. 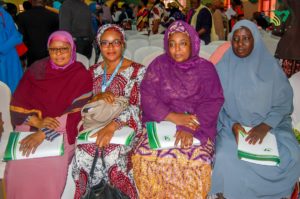 IMPACT OF CONFLICT ON WOMEN.

A panel discussion session focused on the thematic area titled: “Impact of conflict on women”. This session discussed on the major forms of violence against women in Sokoto State, their response and perception.  The panelist discussion the societal and cultural narrative that propagates the discrimination of women such as the exclusion of women in the affairs of the family and communities, lack of appropriate education on women’s health and exclusion from vital roles of decision-making processes as a form of violence against women and can lead to conflicts. The speakers identified the exclusion of women in economic processes is a form of violence against them `and its impact results of low-self-esteem in women, over dependency on men as their husbands, brother or relative.

HOW WOMEN CAN MITIGATE AND PREVENT VIOLENCE.

The second presentation was on the thematic area of titled:” How women can mitigate and prevent violence”. The speaker discussed the strategic roles women can play as peacebuilders in mitigating and preventing violence in their homes and societies at large. The speaker articulately highlighted the innate abilities of women to be peacebuilders and promoters of social cohesion in the family. The speaker encouraged women on the need to bring up children with the right virtues and principles to promote peace within the family, as it is the sole responsibility of the women to build integrity and true virtues in the home. The need for parents to encourage and support the girl child in the family as the empowerment of women starts from the home. 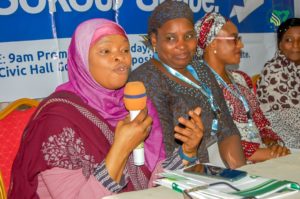