Nearly all security chiefs are Muslims, yet the north is like a war theatre

General  \  Nearly all security chiefs are Muslims, yet the north is like a war theatre

Catholic bishop of Sokoto Diocese, Matthew Kukah, has expressed his disappointment at politicians who feed on religious and ethnic divides during electioneering.

Speaking with Catholic news platform, Cruxnow, Kukah said it was surprising that out of 23 ministers appointed by President Muhammadu Buhari from the north only two were Christians. 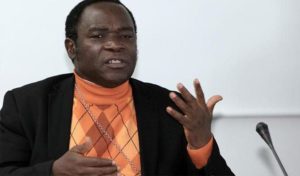 Kukah spoke with the platform on the sidelines of the Catholic bishops conference held in Abeokuta Ogun State.

He said: “Again, one feeds the other. I do not think it is the case that ordinary citizens vote along tribal lines. It is rather the case that politicians across Africa continue to feed the demons of ethnic or religious rivalries and stoke the embers of hatred.

“Take northern Nigeria, which has held on to power for so long in Nigeria, who today the current administration has privileged in an embarrassing manner by breaking away with tradition.

“For example, all security chiefs are Muslims, yet the north has been the theatre of war. Northern Muslims have been assigned the key positions in government. For example, out of 23 Federal Ministers appointed last month, only two are Christians.”

The cleric also said the war against insurgency had lost its human face, adding that the Federal Government was now more concerned about the military side of the war.

“One of the saddest issues for me is the fact that this conflict has focused mostly on a military solution, and this may not be unconnected with the military mind of those who are in power. We have lost the human side of this conflict and because it has become a military operation,” he said.

On restructuring, Kukah said: “I do not subscribe to the superficial saying that everyone should go their separate ways. The truth is that a majority of the Nigerian elite knows that most of them have been exiled from their mansions in the villages because of fear of kidnapping and banditry. So, the idea of ‘let us go our way’ is a bluff.”

This site uses Akismet to reduce spam. Learn how your comment data is processed.